Rooms With a View: Jasmine et Cigarette and Rien 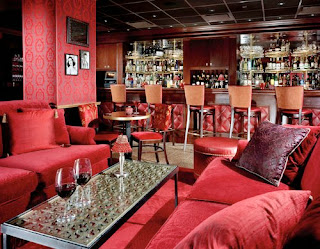 Set two Etat Libre D’Orange boxes back to back, with their red and blue, semi-circle logos, and you get a bulls-eye in the middle, an interesting sight gag for a niche line whose compositions tend toward the oblique. The names, too, sidle up to you coquettishly: Delicious Closet Queen; Encens & Bubblegum; Don’t Get Me Wrong Baby, I Don’t Swallow; Secretions Magnifiques. Quirky, however well done, is often taken to indicate overcompensation, distracting from a chronic lack of substance. But, pace Luca Turin: “Never underestimate the French gift for refinement.” Turning a phrase, you might say that Etat, who have the intelligence and imagination to back up most of their various thematic conceits, are tongue in chic.


It’s slightly misleading to say they specialize in conceptual perfumery, as all perfume is conceptual, yet Etat do spin the concept of conceptual on its head. Your average perfume begins with a brief—a proposal, let’s say. This document presupposes an aura, at the center of which is a mysterious, as yet ill-defined woman. What does this woman feel? What does she look like? The clothes she wears, the places she’s been and the experiences she’s had, the way she cocks her head when you catch her attention, the glint in her eye when she thinks back to the last time she felt the searing gaze of an admirer: all contribute to the refinement of this hypothetical what if. A perfume represents the distillation of such a woman. And when another woman, likely dissimilar in every imaginable way—chiefly, by virtue of being flesh and blood—sees an advertisement for this elixir, it appears to her, its manufacturers hope, like a specialized emotional mirror. Looking into it, she sees a fantasy image of herself.

Etat too sets out with a proposal, and the perfumes just as arguably aspire to a state of mind. The difference is that woman. It isn’t that she’s not there. Someone, man or woman, most certainly could be. It isn’t even that great pains have been taken to keep whoever this person is unspecified. It’s just that the people at Etat, like those at Comme des Garçons, are more interested in place and thing than person, per se. Where is this place? What does it feel like? What does the air smell like? What are the objects in the room, or building, or landscape? What just happened here—or might if you stick around? The mood is not that of a woman in her element, whatever that might be, but of the elements themselves.
Let’s say one of the above boxes contains Jasmine et Cigarette. The other, let’s say, conta 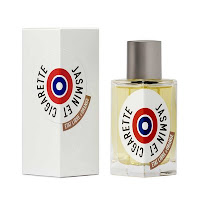 ins Rien. The two are very representative Etat fragrances. The packaging is strictly minimal. What you have to go on is the fragrance and the enclosed copy. It’s worth quoting the latter. The folded note contained in Jasmine et Cigarette mentions “smoky black and white ambiance” and “hazy atmosphere”. The fragrance is the “reminder of a fantasy” in the form of a smell which has been left on one’s clothes or in the mind of another. The movie star fragrance recalls the refined ennui of Marlene Dietrich and Greta Garbo, seen through wisps of smoke. To be sure, the prose is overblown—isn’t most ad copy?—and specific mention is made of a woman, but her features are left to your imagination, and the emphasis remains decidedly on setting. Jasmine et Cigarette puts you inside an old movie, making you both director and star.

What this means is that the experience of Jasmine et Cigarette isn’t mediated in quite the same way as, say, Dior Addict, whose model persists in your mind as you wear it the way the figure on a book jacket stands in for your image of the character as you read, and perhaps forever after. Even the pyramids of Etat fragrances are kept vague. A ‘smoky’ jasmine with tobacco, hay, turmeric, apricot, cedar, amber and musk is about all you’ll get on Jasmine et Cigarette, and shouldn’t it be? What does a pyramid really tell you? Ultimately, when rose means gerianol and various other aromachemicals, the notes proffered for most perfumes are yet another kind of fantasy, a filter through which to enforce someone else’s intended image.

As for Rien: the word translates into nothing, so don't expect much help there, either. If Jasmine et Cigarette presents you with the black and white room of a 1940s Hollywood movie, Rien shuts you in the leather suitcase near the bedside table, inviting you to find your way out. Be sure: there’s a wad of stolen cash in there, and a story to be told. While Rien is no Bandit, and its nose, Antoine Lie, is no Germaine Cellier, the perfumes share a certain sensibility, and Rien could be viewed as rebuilding a room from memory. It has some of Bandit’s lonely aloofness, that smoky, animalic veil which smells deliciously of bittersweet melancholy. Antoine Maisondieu’s Jasmine et Cigarette brings a bit of 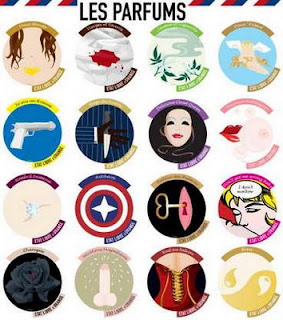 cheer with its flowers, but they’re feint enough to remind you of someone’s absence, creating a mood of longing and expectation. That is to say, if someone gave this bouquet to you, it was intended as a good-bye.

In a world where almost anything is accessible, the Etat line remains, as of now, difficult to obtain. Apparently, Henri Bendel stocks them. Harvey Nichols carries them but don’t expect a return call when you can’t figure out the US equivalent of postal code. Little information exists on the perfumes. Are they of good quality? Yes, and worth the time it takes to track them down and the money they’ll cost. They’re EDP, and true to Turin’s word, exquisitely refined. Part of what makes the two in question so evocative is their lucidity. They are exceptionally smooth. There’s a gravity to these fragrances which the sense of humor belies. Go to the company’s website and see for yourself. Etat wouldn’t have it any other way.
Posted by Brian at 6/25/2008 11:22:00 PM

very easy to get this line now:
www.luckyscent.com

(and no, I don't work for that company, they have a shop in LA that I'm dying to visit - specialize in boutique perfume lines)