More than a few people have noted a passing resemblance between Chanel Allure Sensuelle and Tom Ford Black Orchid. Both follow a recent trend in feminine perfumery, mixing a floral up top with a grunge accord at the bottom, albeit to varying degrees of success. Both have a candied decadence to them. Both dropped the same year. However, Black Orchid gets all the love, while Sensuelle, which must carry the weight of Coco Chanel on its shoulders, is treated as the ugly step-child.
Let’s be clear: Allure Sensuelle is no Chanel No. 5—but neither is Black Orchid. And while Allure Sensuelle has mastermind Jacques Polge behind it, Black Orchid…doesn’t. Like the new and old versions of Rive Gauche, the two intersect, smelling more like each other at certain points during their respective developments, then less. Both arguably unisex, Black Orchid has the advantage of Tom Ford’s blurred lines behind it, whereas Chanel sells to the gender segregationist set, and therefore plays to half its potential audience. 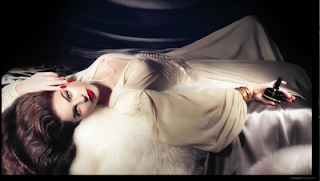 Despite the bluster of its campaign, signaled by the phallic, rectangular bottle (a bit like Mildred Pierce in her square-shouldered furs) Black Orchid never quite pulls it off. From the moment you spray it on, you can see it has big plans. It screams get out of the way in a coarse baritone vibrato. For the first five or ten minutes it's running off at the mouth, boasting so assertively that you trust it has something to say. It does and it doesn’t. The construction of Black Orchid is comparable to one of those old Rube Goldberg contraptions. In order for the little silver ball to end up in the bucket, everything must be perfectly conceived and constructed. The metal rails must be pitched the right way, lest the ball lose momentum before it hits its mark. The wooden lever that ball is meant to drop on, which will then hit the stick which holds the rubber fist, which will then slam against the button which releases the trap door, and the ball, so it can roll along its merry way, must be flexible enough. You look at a Rube Goldberg construction and it seems fine, everything looks great, until you try it out, at which point it either operates beautifully or things fall apart. Black Orchid is pitched a little too sharply. Certain chutes and ladders have been angled ever so slightly the wrong way, but you don’t know it until you’re rolling along all those rails. The proportions are wrong. You can see the image you’re meant to watch, under sheets of zigzagging static, or you think you can—but whoever tried to fix the picture slammed the side of the TV, rather than taking the time to adjust the knobs.
The heart of the fragrance lingers in gorgeous, twilit territory, where the flowers are nicely complicated, as if turning the lights down low made it as hard to smell as see, and a vivid, earthen woodiness reminds you the ground is underfoot. There’s even a tangy zest somewhere in there—turning the aromatic pungency of a fougere on its head. Wild Orchid lingers, pretending to relax, but only briefly, and the bluster of the opening notes resumes. This is a busy fragrance—places to go, people to see—off it rushes again. That would be fine, were it rushing somewhere half as interesting as the place it’s evacuating. The next thing you know, it’s stuffing its face with food, so furiously that you’d be hard pressed to say what’s on the menu.
Black Orchid’s intentions are fairly clear, and that’s probably a large part of its problem. From the ads and the hype you know what it’s meant to be: a bold, starkly etched fragrance reminiscent of those the great houses once released with the fanfare of the first walk on the moon. And it is reminiscent—like Jessica Rabbit is reminiscent of Rita Hayworth. In order to understand Black Orchid you must hold it up to the classics, and of course it comes off like a caricature. A sham 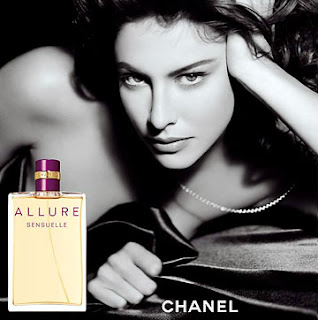 e, really, as it isn’t bad—or even mediocre.

The heart of Allure Sensuelle never quite achieves the magic of Black Orchid’s brief, hallucinatory moment of beauty. Arguably more linear, it is a consistent performer. It has some of Black Orchid’s tang but holds on to it until it figures out how to use it. It has the incense on bottom, along with patchouli and vanilla in place of truffle. It’s remarkably similar, but feels confident it has nothing to prove. Someone please tell this fragrance it’s a Chanel. Clearly it didn’t get that memo, which is where its own troubles began. Like Guerlain, the house of Chanel is on thin ice: will it mess with the perfection of its old reliables? Will it continue to produce the kind of quality women the world over have come to expect? Well, yes and no, in no certain order.Had Allure Sensuelle been release by one of the niche lines this would be a moot issue. It’s a perfectly respectable, even lovely perfume. It draws from various currents of modern perfumery to show the others how it’s done. People expect innovation from Chanel—perhaps unfairly. So a mother lode of aldehydes were dumped into No. 5. So Cuir de Russie is the most exquisite embodiment of luxury between Planet Earth and Pluto. Why must every Chanel fragrance which doesn’t have the good fortune to be a miracle have to be considered a miserable step in the wrong direction?Allure Sensuelle has its strengths. Its use of vetiver is accomplished and unusual for a feminine perfume, handled with considerable sensitivity to overall development. It has just the right amount of peppery dissonance, is burnished just so with the solar heat of frankincense. It lasts. It is aptly named, managing to achieve an interesting balance between salty and sweet, floral and oriental. It is arguably more androgynous than Black Orchid, and when a man smells it on a woman, he might just be taken aback by unexpected, unfamiliar urges and impulses.If anything, Chanel must be faulted for its laziness in building a palpable sense of identity around Allure Sensuelle. A simple comparison between the genius of Ford’s creative direction (Black Orchid: vintage glamor, decadent impulses) and Chanel’s proposed fantasy (Allure Sensuelle: exactly…what…exactly when…exactly where and how?) makes clear Allure Sensuelle's true failure.All the same, you could do much, much worse—in or outside of Chanel.
Posted by Brian at 6/21/2008 12:01:00 PM