An Open Letter to Annick Menardo

If you only knew how much time I spend walking around in your head-space—and I don’t even know how to pronounce your last name! What’s the etymology? I haven’t been able to find much out about you online. In the only photos I’ve seen, your face is covered by a handkerchief. I’m guessing the handkerchief is soaked in perfume, and you couldn’t stop working long enough to take a picture. You’re a busy woman. It isn’t just that you’ve worked on many perfumes—though I know you have—but the level of quality you strive to maintain. Body Kouros, Hypnotic Poison, Xeryus Rouge, Roma Uomo, Bulgari Black, Lolita Lempicka (man and woman), Boss Hugo Boss, Hypnose. Stop me anytime here. Aside from Roma, I can’t think of a Menardo scent which lacks in persistence and diffusion. I picture you in your lab with hands so busily mixing and shaking and sniffing and decanting that you appear, like Kali, to have many arms, all moving simultaneously, with superhuman agility and precision.
You were born in Cannes and wanted to be a psychiatrist. I don’t know what Cannes says about you but your interest in psychology makes perfect sense to me. Emotional propositions, your fragrances elicit potent feelings. Impossible to stand in front of a Van Gogh without being moved back or forth in time along some visceral emotional spectrum—and so it is with a Menardo. When I first smelled Bulgari Black, I didn’t know what to think. I’d smelled everything I thought I could possibly be interested in. I was such an authority, couldn’t be bothered with the 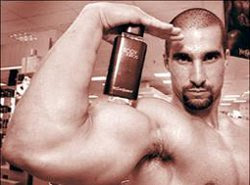 idea of surprise. I knew what I liked, I had my list, I’d tried everything. I was on my way out of the store, but I’m greedy: one more fragrance, one last whiff before I go. Imagine my surprise. Black stopped me dead in my tracks—because, quite frankly, rubber? I mean, really; you must be joking. “Black is New York, Berlin, Hong Kong or Tokyo and its smoking sidewalks, its concrete buildings and its steel bridges.” Well, okay. If they say so. To me it came out of nowhere—not black tea, not leather but a great big miasmal accord of the uncanny, something out of Ambrose Bierce, the word for which might have been in The Devil’s Dictionary had it not taken up too many pages to get across. What is Black, if not a head trip?
After this I tracked down the others. Lempicka au Masculine is comfort food, recalling the sweet, doughy dishes a mother who loved you might have served. Xeryus Rouge: a spicy something or other from the proverbial Orient, hot to the touch. In the osmoz of my mind, Body Kouros is classified as Camphoraceous-Gourmand. The day I bought Hypnotic Poison, I wore it to a friend’s house. Here is my report: not two steps through the door I was asked what that wonderful smell was. Another convert; another comrade. Were your ears buzzing? If so, they must frequently. And yet very few of your juices, with the exception of Lolita Women, seems to have struck a popular chord. No small surprise, perhaps, given the kind of copy written to sell them. “The mauve color is symbolic of faeries,” someone wrote of the Lolita Lempicka au Masculine bottle. Is it any wonder men didn’t flock to the shelves in great prancing droves, their toes all a-twinkle? Only Black seems to have been packaged and marketed with the right tone of top-down design—and that, I suspect, by happy accident.
For this and other reasons you’re a cult figure, the David Lynch of perfumery. Black is your Blue Velvet, Hypnotic Poison your Mullholland Drive. Like Lynch you are an enigma. Now that I think of it, perhaps your face is covered with the handkerchief by decree. Ludicrously, we’re meant to believe Lolita herself waved her magic wand and—poof! Those little glass appl

e bottles sprouted from trees. The public, somewhat unconsciously, imagines Yves Saint Laurent in your place, mixing Body Kouros up by trial and error in his velvet-upholstered lab. Dior had a bright idea one day; in a trance, he saw red, then Hypnotic Poison. And so on. Perfumers are kept in the shadows, remaining spectral figures to most, so that very few would ever make the connection between Xeryus Rouge and Roma Uomo, unless it turned out that Laura Biagotti and Givenchy had engaged in a torrid, uber-secret affair. It’s as if The Met had scattered its Van Goghs all throughout the gallery, removing anything indicating who’d painted them. Would someone who'd never been exposed to his art before realize that the sunflower in the vase had been cut from those in the field? Cult figures are great—for those who love them—but it’s nice to be recognized at large. It’s nice to know where the sunflower came from, so you can keep going back for more.
I’m writing to tell you about my plans to start the Annick Menardo fan club, membership of which will include monthly newsletters and bi-weekly sniff-a-thons. Every January, we’ll coalesce en masse at a Holiday Inn somewhere in Iowa or Georgia or Maine, attending panel discussions with names like “Whence came that dreamy, signature vanillic dry down?” “Is Black to Goth as Robert Smith of the Cure is to liquid eyeliner?” “What to do with yourself, should Body Kouros go the way of Havana.” I’ll be the moderator, switchboard operator, and benevolent head of the membership drive. I’ll be your tireless advocate. Barack Obama will thank you for your contribution to world peace in his inaugural address. I'm on it. Like you I’ll keep my arms moving. I’m thoroughly committed to the idea, Ms. Menardo—but we’ll need a clearer picture.
As ever,
Your devoted fan.
Posted by Brian at 6/26/2008 06:48:00 PM

Can I join the Fan Club ?
Annnniiiiiick !!!

Yes, you can. Here are the rules of membership:

You must kiss the feet of Ms. Menardo.

You must kiss the toes of each foot of Ms. Menardo.

You must sign a restraining order promising that, after the above, you shall stay within ten kilometers of Ms. Menardo at all times. Hopefully, you can still smell her from there.

You must repeat the motto at our monthly conference call: Oh Ms. Menardo, my poster boy, my hero, my rock star, my... (and so on, yadda yadda yadda). Then you must send Ms. Menardo a letter in which your tears of joy at the mere sound of her name are expressed in poetic terms (iambic pentimeter preferred).

Anonymous said...
This comment has been removed by a blog administrator.
November 13, 2008

You must try the Le Labo perfumes! The Tokyo Gaiac is a pefume Annick assisted with....its AMAZING! I am a huge fan!

oh dear, I am a journalist and i am going to do an face to face interview with Ms Menardo... i find your letter by accidently and i don't know whether you still are crazy for her but i am moved!!should i do something for you? maybe you can write to me, my email:fenglujing@yahoo.com.cn

Jing, lucky you. Let me know what the link is when you finish. I'd love to read it.