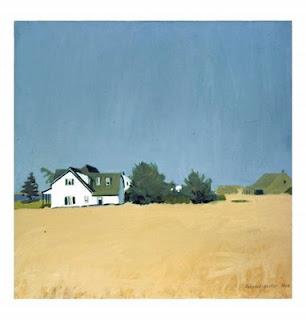 So overused and misunderstood during its heyday that people still believe it to stink, Tommy Girl is the king and queen of all fresh scents. Creator Calice Becker must surely be on more than a few hit lists for inflicting friends and families across the country with this and other big bang theory fragrances like Beyond Paradise, J’Adore, and DKNY Energy, which, as the writer Bard Cole noted, smells like sweaty rose addicted to pipe tobacco. Becker's art is representational, elucidating the shape, texture, and sensation of the natural world with the kind of painterly sense of light and color you see in the work of Fairfield Porter (above). It’s as if an entire wildlife landscape were shoved rather than distilled into a bottle of Tommy Girl, and that might be a little much for many people, yet it’s a startlingly comprehensive vision of feel-good sunniness, where every detail, exposed to that golden light, registers with precision clarity and breathtaking, mesmeric depth, right down to the dirt underfoot.

It might be impossible for anyone to wear Tommy Girl anymore. Maybe it shuts the nose down, the way paint thinner, gasoline, and formaldehyde, all instantly recognizable, do. Then again, mass-market scents like this are so over-hyped that the very way we wear them—whe 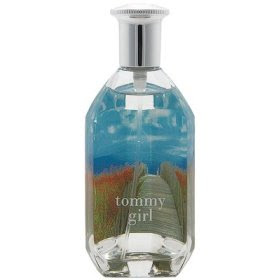 n, how, with what, with whom—is conditioned. Casual in caps is the buzzword for all Hilfiger fragrance campaigns. The wind is blowing through your salted blond hair. Your shirt isn’t ironed because you’re out in the country or at the beach and everyone knows you have money anyway, so why make the effort? You’re tan because God wants you that way. There are no ants in the grass because you’re barefoot and they know better than to mess with God’s chosen people.
What others might just be smelling when they whiff Tommy Girl ten years on is a particularly virulent form of materialistic narcissism held over from the nineties. In Hilfiger ads, there’s always a Hummer right outside the picture frame. After the photo, everyone will pile into it and trod right over the grass, killing wildlife and ear drums alike. Nature is there to be plundered—the perfect wastebasket for your empty soda can. Somehow, Tommy Girl has become synonymous with ambivalence about the feelings of others, a proud, reckless disregard for anything beyond the reach of one’s manicured fingertips. What it needs is the kind of balls out makeover Paris Hilton underwent after her stint in prison, which shouldn’t be hard; at least with Tommy Girl, the substance is there. Your mind simply needs to meet it half way. Wearing it with black tie instead of jeans and flip flops just might do it, if you’re a guy. It's a brilliant subversion, in that context, of the masculine power frags it was probably designed to broadcast over. If you’re a woman, just wear less more judiciously. You might be amazed at the difference. A little sunshine goes a long way.
Posted by Brian at 6/18/2008 10:26:00 AM