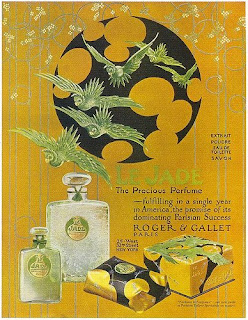 Now discontinued, Le Jade was released by Roger & Gallet in 1923, four years after Mitsouko, two years before Shalimar. Given the ubiquity of Guerlain on the world market and its mastery of the form, the copy for this ad seems dubious, boasting of "dominating" Parisian success. Clearly a bid in the Oriental sweepstakes, Le Jade might very well have been popular in its time, though it has long since been discontinued and a simple search on google fails to turn up much mention of it. The ad dates from 1924.
Posted by Abigail at 6/15/2008 06:00:00 PM