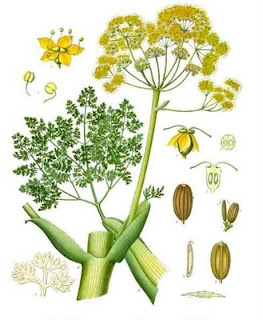 With its penetrating, pine-like top note and slightly bitter, woody base, galbanum makes green pop, as if one of the green chypres had slapped you hard in the face with a chunk of bundled stems. Galbanum is a gum resin derived from certain Persian plant species grown abundantly in Iran. Its large flowering heads resemble those of fennel.

The essential oil has long been well-regarded by occultists. Alistair Crowley associated the aroma's properties with air, though it just as readily evokes earth. Depending on who you consult, galbanum is said to be a respiratory aide and an augment to psychic abilities. Pagan witchcraft regards it as a protectant. Perfumers, themselves alchemists of sorts, use it to add a certain kind of magic to their compositions. Part frankincense, part vetiver, its leafy terpenoid astringency ventilates the pastures of Carven’s Ma Griffe, Cellier’s Vent Vert, Ivoire de Balmain, Pheromone, Devin, Chanel No. 19 and, most spectacularly, Estee Lauder’s Aliage, which is more gale force than languid breeze.

Ivoire would fall on one end of the galbanum spectrum, Aliage on the other, with Pheromone following closely behind. Ivoire uses galbanum subtly, like its aldehydes, as a bolster to its floral accord. The effect is a rose bush surrounded by crisp, dry hay. Where Ivoire is ultimately arid, still, and slightly toasted, Vent Vert glistens, shimmering indefinitely with activity. Think of a lime rind rubbed into geranium leaves and you begin to apprehend Vent Vert’s effervescent character. Considered by some the first green fragrance, Vent Vert has a slightly raw dissonance, in large part due to galbanum. Chanel No. 19 is the adult counterpart to Vent Vert, smooth and transparent, a green floral quietly electrified by the glow of camphor.


Vent Vert and Ivoire arrange themselves parenthetically on either side of Gucci Envy for Women, which is something of a happy compromise between the two. All three share floral notes: hyacinth, rose, lily of the valley. Famously obsessed over by Tom Ford and Maurice Roucel, Envy's tall, slender bottle reflects the fragrance’s intrinsic angularity. Even the silver cap references something icily metallic within the construction. Envy is hard to articulate, and that metal sheen might strike you as a powdery hybrid of synthetic iris and musk, until you recognize the presence of galbanum, which like eucalyptus whiffs of menthol. Envy is a gorgeously understated use of the note, tart and dry simultaneously.

Don't be too quick to dismiss Pheromone. It's something of a galbanum retrospective, with florals and frankincense and pungent, sharp greens. This is chartreuse green, a bright landscape painted on black velvet in bold, broad strokes. The results are just this side of over the top - but hands down, the apogee of galbanum’s use in perfumery, still unmatched and, amazingly, still around, is Aliage. Like Envy its notes include peach, rose and jasmine, but Aliage bursts into coniferous territory Envy cautiously skirts, possessing a sucker punch of pine, thyme, vetiver, and oakmoss. Simulating a virtual reality of flowers shellacked in Vick’s Vapo-Rub, it’s like nothing you’ve ever smelled, and strangely familiar. Aliage is shockingly inexpensive.


Galbanum is mercurial, effecting compositions in subtly different ways. It smells modern, though, along with aldehydes, it was the previous generation’s equivalent to the fruity accords which buoy contemporary florals to varying degrees and towards often vastly different ends. The smell is intensely, viscerally green, smelling of grass and aromatic weeds and herbs. It penetrates your consciousness and roots there, a vivid inhalation of the great Out There.
Posted by Brian at 6/20/2008 12:33:00 AM