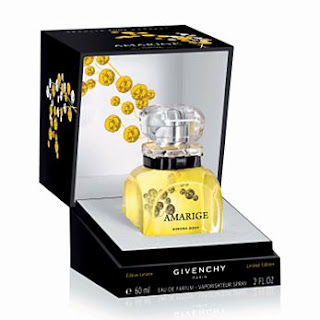 Today I went to the Short Hills mall in . The fictional family from the Sopranos lived right around the corner in . Carmella and Meadow must have loved shopping here. This mall is a dream for perfume fanatics. Stores of note: Saks, Neiman Marcus, Nordstrom, Sephora, L’Occitane, Molton Brown, Bloomingdales and Macy’s.
I went in search of two new fragrances: Lolita Lempicka Forbidden Flower and Hermes Un Jardins Apres la Mousson. I purchased the following: Amarige 2007 Limited Harvest Edition, Prada Infusion d'Iris, Missoni Aqua, Annick Goutal Petit Cherie, Comptur Sud Amour Cacao, Lolita Lempicka Forbidden Flower, Kenzo Amour Indian Holi. Unfortunately, Hermes Un Jardins Apres la Mousson was out of stock everywhere.
I’ll discuss all the others later, tonight I’m swooning all over myself because of the Amarige 2007 Limited Harvest Edition. I adore the regular Amarige. But this stuff is stunning. It’s like regular Amarige minus anything noticeably synthetic and with greater mimosa clarity. Givenchy says the main note of Amarige is mimosa. The Limited Harvest Edition contains Mimosa exclusively from Tamil, . Apparently 2007 was an exceptional year for mimosa from Tamil, . I guess perfume is similar to wine in this regard. Like grapes, floral harvests vary from year to year. I might have though this was a marketing gimmick until I smelt the juice and my knees buckled.
Amarige 2007 Limited Harvest Edition doesn’t conjure up any childhood associations or memories for me like most other perfumes do. If I had to (upon the threat of death or something) choose a perfume that I consider to be my signature scent it would be Amarige. Givenchy launched Amarige in 1992 and I began wearing it in 1994 or so. I was in college. I wore Amarige exclusively for the next 4 years. Being just out of college and broke had something to do with wearing it for 4 years straight, but I do love it just the same. As much as it’s considered a very popular fragrance I never come across anyone wearing it. Not being from or wherever else mimosa grows naturally I’m not familiar with the scent of mimosa. I’ve smelt Mimosa Pour Moi by L’Artisan but this is so light and subtle and smells nothing like Amarige. The image that comes to mind when I wear and smell Amarige is orange molten lava. In fact, the color association is most definitely orange, an orangey-yellowish-brown crusted lava. It’s lava because the fragrance is thick, warm and enveloping. It’s thick and heavy but also airy all at the same time. One does need to be careful with light application because too much and it could easily walk in the room a few feet before you and stay 10 minutes after you leave.

Technically it’s a floral oriental with a woody base. Among the listed top notes for Amarige are neroli, mandarin leaf and coumarin. This makes sense, because I love neroli and I also love Lou Lou by Cacharel which is said to be based upon coumarin. Coumarin is an old fashioned perfume note, and when it’s done well I think it lends a sophistication and timelessness to modern perfumes.

I looked up Coumarin and found this from Wikipedia: Coumarin is a chemical compound (benzopyrone): a toxin found in many plants, notably in high concentration in the tonka bean, woodruff, mullein and bison grass. It has a sweet scent, readily recognized as the scent of newly-mown hay, and has been used in perfumes since 1882. The name comes from a French word, coumarou, for the tonka bean.

Oh, Amarige, you are such a complex and gorgeous fragrance, you’re citrusy & green (neroli, coumarin & mandarin leaf), yet you’re heavy and airy, while also earthy and woody, and after a few hours you become orange molten lava all set upon an airy woody base. Amarige is complex, unusual, feisty and unabashedly sexy. If Amarige were a person, she’d be one very complicated dame. She’d be sometimes unbearable, but mostly a magnetically charming knockout. But she doesn’t stop there, I told you she was complicated, she’s much more than just a sexy vixen, because she also has a heart and softness and a worldly sophistication that is certainly classy and timeless. She is so utterly enigmatic and impossible to describe that when you wear her she simply becomes you.