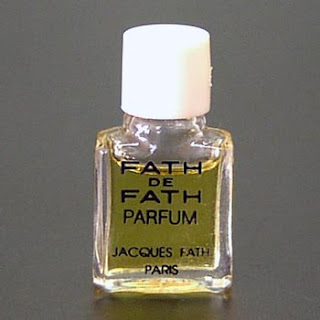 Fath de Fath is the kind of perfume you give to your mother on Mother’s Day, then worry a little, wondering whether she likes it as much as you do. When she assures you she does, you can’t quite believe her. As you remind her not to store the bottle in her bathroom, out on the counter where the steam and the sunlight will hasten its destruction, urging her instead to store it in the bottom drawer of her bureau, in its box, wrapped in a sock which should then be wrapped in a towel, you listen for cues in her tone of voice. Smelling it now on your arm, you can’t imagine what possessed you. Fath de Fath seems at first perfectly lovely—fruit at the top, orange blossom and tuberose in the middle. Originally released in 1954, it was reformulated forty years later, but still recalls old school floral chypres like Jolie Madame and Patou 1000, prolonging a formality in perfumery which for the most part no longer exists. Pretty and prim, you thought. So why does it suddenly seem more unusual than all that? Perhaps its initial nostalgic aroma muddled your thinking.
What gives you pause is that first dry down, during which you detect something ever so slightly off-putting. That smell is Benzoin. An ingredient in many fragrances, typically oriental variants, Benzoin is a resin derived from a tree or shrub of the same name (more formally, Styrax Tonkiniensis) which is native to Indochina. Incisions are made in the bark, through which the tree excretes a honey-colored sap. During the process of cultivation, this viscous material hardens. The food industry uses Benzoin as a flavor additive in gum, pudding, soft drinks, and candy, a cheaper substitute for vanilla. Its aroma is sweetly balsamic, vaguely woody—a glass of soda left out overnight, tart and flat. Benzoin works excellently as a fixative and shows up in the basenotes of many fragrance pyramids. In some scents its presence is more easily discernable. The well-orchestrated symphony of Opium renders it all but invisible, and yet it affords that overall composition a certain resinous heft. Body Kouros aerates it with the addition of eucalyptus. Dune qualifies as one of the strangest, most imaginative uses of benzoin, pairing it with Aldehydes; the bright, shimmering form you first ascertain turns out to be a mirage, and you're left with a vast expanse of hollow, spectral diffusion. In contrast, L’Instant, Obsession for Men, and Shalimar employ benzoin with considerable subtlety. Fendi Theorema uses it more transparently, augmenting its waxen character with dewy fruit. Par Amour features it perhaps even more pronouncedly than Fath de Fath, resulting in a rose by way of Madame Tussaud’s. Tuscany per Donna livens things up with carnation.

The top notes of Fath de Fath reportedly include 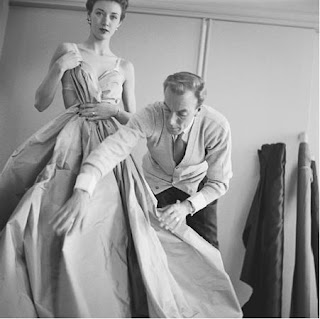 cassis, mandarin, lemon, and pear. Lily of the valley, Heliotrope, and Orange blossom manage somehow to tame the beast of tuberose in the heart of the fragrance. If no one told you, you might not even sense it there. The patchouli in the basenotes likely contributes to keeping the low profile. Tonka, which smells of hay, is often included alongside benzoin, as it is here. Fath de Fath resembles Bal a Versailles in some respects, substituting the uncanny, destabilizing influence of benzoin for civet. The fragrance bridges trends from vastly different eras, lightening up a classic sensibility, transcending time and place in the process. Ultimately, there’s something slightly askew in its elegant diffusion, modernizing and dating it simultaneously. It would be as out of place in the fifties as it was in the nineties, and maybe everywhere in between. That dissonance can be quite attractive in a perfume, and in Fath de Fath it creates a subtle dichotomous frisson, like the heavy bass of Beck rattling the windows on a restored Bentley. In the final analysis, Fath de Fath might just drag your mother into the 21st Century, if she’s agreeable to the idea—or perhaps it will encourage you to meet her halfway.
Posted by Brian at 6/24/2008 06:29:00 PM

gosh! what a description and analysis! most of it went right over my head, but i enjoyed reading it despite.

this is my all-time favorite scent. i just had a sniff of it...but can't understand what you mean. of course, i am an illiterate compared to you about the art/science of perfumology. i just love this fragrance. what is your view of iris gris? thanks...